Are you buying gold with Indian rupee? Be ready for an unexpected twist

Updated : January 15, 2020 12:43 PM IST
Depending on how one looks at it, gold actually multiplied USD’s moves 2-3 times during the mid-90 decline.
It’s very likely that we’ll see much lower gold values before we see much higher prices.

When analysing the price of gold, many investors look at its performance in terms of the US dollar and there is a good reason for it. After all, the USD is the world’s reserve currency. However, despite the dollar’s popularity, it’s not the currency that most of the world’s gold investors use on a day to day basis. Consequently, looking at gold’s performance only in terms of the US dollar means greatly narrowing one’s point of view, and limiting one’s odds of success.

Today, we’ll take a moment to analyse the gold market from the Indian point of view. Gold has a special place in Indian history and culture. India is the second biggest “consumer” of gold (right after China). The USA’s gold consumption is the third biggest in the world, but it’s less than one-fourth of the Indian gold consumption. This means that to a considerable extent, Indian gold buyers can influence gold’s fundamental situation.

Moreover, India is the second-largest English-speaking country (the US comes in first with 268 million English speakers, while about 125 million people speak English in India). Since we’re writing in English and about gold, it’s only natural to discuss the Indian side of the gold market. And by that, we mean taking a closer look at gold’s price in the Indian rupee.

In recent years the value of the Indian currency has declined compared to the value of the US dollar, and so did gold. This means that if you live in India, you have yet another reason to be holding gold and one less reason to worry that gold is going to decline profoundly. Yet, the situation is not that simple. After all, the huge value increases in the USD Index translated into declines in gold that were even bigger. This means that from the non-USD point of view, for instance from the Indian point of view, the gold price still declined. Where does that lead us to?

It leads us to checking what really happened with the price of gold in terms of Indian rupees during two situations that appear most similar to the current situation with regard to the USD Index movement (the 80s and mid-90s). In particular, the less distant from these situations – the mid-90s – is outstanding in terms of similarity, and looking at what happened to gold form the Indian perspective at that time should give us invaluable insight into what may be lurking just around the corner.

First things first – why should you care about some two situations from a rather distant past? We wrote about it, but it was already some time ago, so it seems appropriate to go over it once again.

Let’s start with the fact that the USD Index is holding up extremely well. It’s not plunging and it’s moving in a rising trend channel despite Trump's – US President’s – numerous calls for lower USD values, the major shift in Fed's policy (moving from monetary tightening to loosening). If it happens for a day, or a week, or even a month, it could be accidental. But it’s been taking place for many months. And it’s not a coincidence either.

The USD Index is after an epic breakout and a huge verification thereof.

The Big Picture View of the USD Index The 2014-2015 rally caused the USD Index to break above the declining very-long-term resistance line, which was verified as support three times. This is a textbook example of a breakout and we can't stress enough how important it is.

The most notable verification was the final one that we saw in 2018. Since the 2018 bottom, the USD Index is moving higher and the consolidation that it's been in for about a year now is just a pause after the very initial part of the likely massive rally that's coming.

If even the Fed and the US president can't make the USD Index decline for long, just imagine how powerful the bulls really are here. The rally is likely to be huge and the short-term (here: several-month long) consolidation may already be over.

There are two cases on the above chart when the USD Index was just starting its massive rallies: In the early 1980s and in the mid-90s. What happened in gold at that time? These were the starting points of gold's most important declines in the past decades. The second example is much more in tune with the current situation as that's when gold was after years of prolonged consolidation. The early 1980s better compare to what happened after the 2011 top.

Please note that just as what we saw earlier this year, gold initially showed some strength - in February 1996 - by rallying a bit above the previous highs. The USD Index bottomed in April 1995, so there was almost a yearly delay in gold's reaction. But in the end, the USD - gold relationship worked as expected anyway.

The USD's most recent long-term bottom formed in February 2018 and gold seems to have topped right now. This time, it's a bit more than a year of delay, but it's unreasonable to expect just one situation to be repeated to the letter given different economic and geopolitical environments. The situations are not likely to be identical, but they are likely to be similar - and they indeed are.

What happened after the February 1995 top? Gold declined and kept on declining until reaching the final bottom. Only after this bottom was reached, a new powerful bull market started.

Please note that the pace at which gold declined initially after the top - in the first few months – was nothing to call home about. However, after the initial few months, one could report gold’s decline as really fast.

Let’s compare the sizes of the rallies in the USDX and declines in gold. In the early 80s, the USDX has almost doubled in value, while gold’s value was divided by the factor of 3.  In the mid-90s, the USDX rallied by about 50 percent from its lows, while gold’s value was divided by almost 1.7. Gold magnified what happened in the USD Index in both cases, if we take into account the starting and ending points of the price moves.

However, one can’t forget that the price moves in USD and in gold started at different times – especially in the mid-90s! The USDX bottomed sooner, which means that when gold was topping, the USDX was already after a part of its rally. Consequently, when gold actually declined, it declined based on only part of the slide in the USDX.

So, in order to estimate the real leverage, it would be more appropriate to calculate it in the following way:

Depending on how one looks at it, gold actually multiplied USD’s moves 2-3 times during the mid-90 decline.

Depending on how one looks at it, gold actually multiplied USD’s moves by 1.6 – 4.4 times during the early-80 decline.

This means that just because one is not using US dollars as their primary currency, it doesn’t result in being safe from gold’s declines that are accompanied by USD’s big upswings.

Let’s get back to the topic of gold price in Indian rupees. If gold’s trading in 2020 is going to resemble its mid-90s performance, then it would be a good idea to check what happened with gold in terms of Indian rupee at that time.

Gold from the Indian Perspective 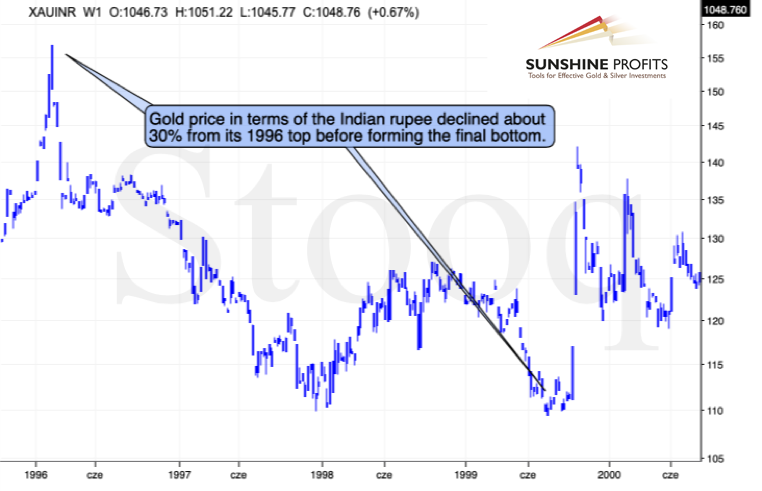 Gold price in terms of the Indian rupee declined about 30 percent from its 1996 top before forming the final bottom. That’s not a small move – that’s a move that could erase a large part of the buy-and-hold investors capital and it would take many months to just get back to the initial level. If one managed to get out close to the top, or even profit thanks to adjusting one’s positions to the ones that profit from gold’s decline, it would be entirely different and much more pleasant. 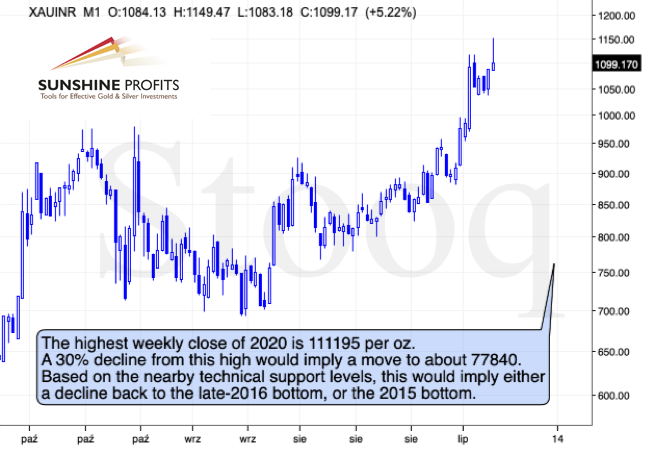 The highest weekly closing price of 2020 is 111195 per oz. A 30 percent decline from this high would imply a move to about 77840. Based on the nearby technical support levels, this would imply either a decline back to the late-2016 bottom, or the 2015 bottom. If we see a particularly bearish market news, gold could decline even below the 2015 bottom. Of course, we can’t guarantee that this will indeed happen, but it seems that gold could decline quite a lot before the final bottom forms.

If it seems like it can’t happen, because the price rallied so high so soon, please note that the times after sharp upswings were exactly the times when gold was starting the declines – especially in 2013 and 2016.

All the above might seem quite complex, so let’s discuss it once again, this time using a brief Q&A:

Gold is likely to decline in the following months, also in terms of the Indian rupee.

There are numerous reasons, but one of the key ones is the epic breakout in the USD Index that was more than confirmed. Big USD Index rallies follow such breakouts, and they sooner or later trigger big declines in gold.

The big USD Index rallies trigger declines in gold that much bigger than the said rallies. This means that even if you never bought anything using US dollars, the big increase in its value can still affect you if you’re investing or considering investing in gold.

It did. Back then – in the mid-90s – gold priced in the Indian rupee declined by about 30 percent. It doesn’t have to happen again, and nobody can guarantee any outcome, but that’s exactly what happened.

Again, we can’t guarantee anything with regard to performance, market movement, or individual stock picks, but in our view, it’s very likely that we’ll see much lower gold values before we see much higher prices. A decline below $1,000 in terms of the USD is likely in our view. Gold price in terms of the Indian rupee could move to its late-2016 bottom, the 2015 bottom or even below it. The $890 target in the USD terms seems to be the most precise one and it appears to be a good idea to monitor gold price movement and make gold price forecasts based on the USD perspective in order to determine the optimal entry point for big long positions and perhaps to exit the positions that would be aimed to profit from lower gold prices.

Przemyslaw Radomski, CFA is the founder and editor-in-chief at Sunshine Profits as well as the portfolio manager of his gold investment fund.
Tags gold market Gold Prices gold prices in rupees indian rupee US Dollar Views

Amazon pumps in over Rs 1,715 crore into India units